China Sure Is Building a Lot of High-Speed Rail 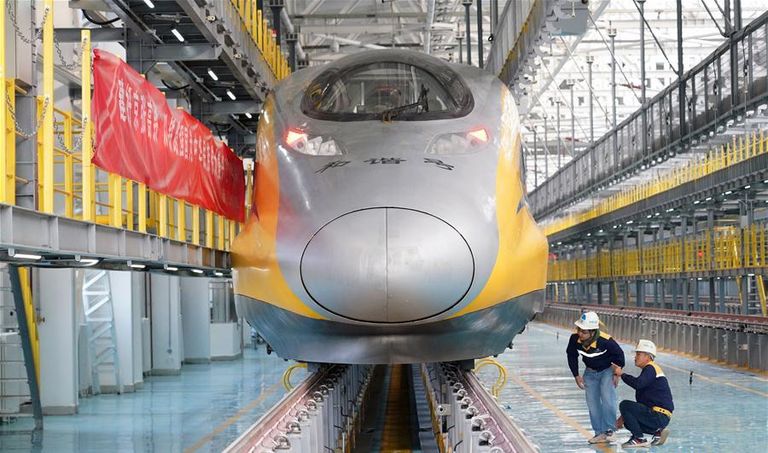 According to Chinese sources, trains testing on the Beijing-Zhangjiakou High-speed Railway were able to break the nation's locomotive speed record at approximately 239 miles per hour (mph). The speed is 10 percent higher than the train's original designs.
The train is meant to connect China's capital city, Beijing, and its close neighbor to the northwest, the city of Zhangjiakou, sometimes called Kalgan. The railway will extend a little over 108 miles between the cities, the latter of which has the nickname of "Beijing's Northern Door." The route will be able to shorten the trip from three hours to one.
It's not likely that the train will be hitting 239 during its conventional trips. Instead, it will stick to the speed it was designed to hit: a little over 217 mph. But China isn't just shooting for speed with the train.
China Railway (CR), which is overseeing the project through its China Railway High-speed project, hopes the line will be the world's first autonomous, driver-monitored railway. CR teams have begun debugging the software that will run in maintenance stations, and real-time data monitoring has performed well so far.
CR says the entire line will be dotted with A.I-based substations that will monitor the train's status and continually check for malfunctions. Technology will also affect the passenger's journey, with robots guiding passengers toward the trains at stations and even helping them with baggage.
The railway is part of a larger CR plan for nearly 2,000 miles of new high-speed rail in 2019. Lu Dongfu, CR's general manager, has told state media that high-speed rail in the country will soon exceed 18,640 miles (30,00o km). That growth, especially connected toward Beijing, is part of the country's planning for the upcoming 2022 Winter Olympic Games.
China has its eyes on increasingly fast trains. Earlier this year, CR announced it was building a prototype that could blow the Beijing-Zhangjiakou train away, designed to take passengers on a journey at 373 mph (600 km/h). Faster than a plane on its routes, CR also hopes the prototype will be running by 2021. During the Olympics, China wants tourists to see outside of the capital city as well, and its rail expansion could make that easier than ever.