All the New Products Announced at Today's Apple Event 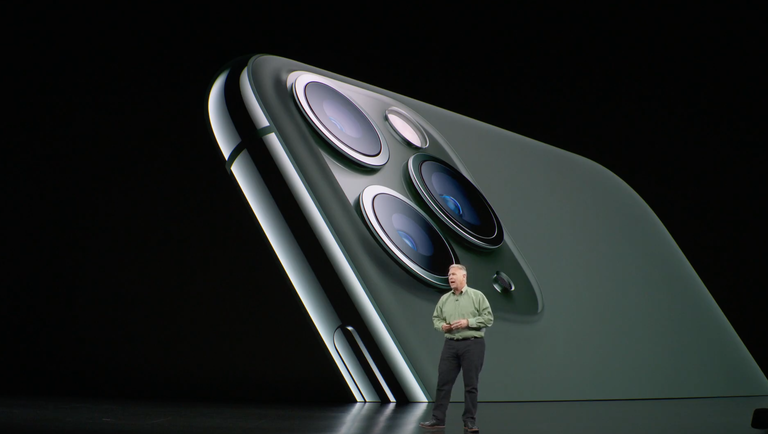 As predicted, the new model will include a funky looking camera array with three sensors aligned in a triangular shape.
New colors include midnight green, space gray, silver, and a new gold color. The display comes in 6.5 inches and 5.8 inches. The screen is a new OLED panel and features haptic touch and the most pixels ever in an iPhone while also being more energy efficient.
The machine learning capabilities have been improved through the new chip design, increasing performance and making augmented reality applications far better. The new battery lasts four hours longer than iPhone Xs Max. The chargers are also improved to juice up your battery more quickly.
The new camera system (which is already generating hella memes) is called "Pro." It includes a 12 megapixel wide camera, 12 megapixel ultra wide camera and a 12 megapixel telephoto camera that lets in 40% more light. You can now zoom in two times closer and zoom out two times further thanks to the new sensors.
Filmmakers, rejoice. There's the ability to select lenses while recording. A new feature allows you to see all four lens views in a 2x2 grid. That helps to reduce the number of takes needed because each is recording simultaneously.
The new iPhone 11 features a new sound system that surrounds you, including built-in Dolby Atmos. It also comes in six colors, including a very subtle lilac color and a mint green. It costs $699.
Dual-cameras are the biggest exterior change. It includes a 12 megapixel wide camera and a 12 megapixel ultra-wide camera that captures details on the fringes of the screen. The idea is to capture more without moving. The ultra-wide view can elongate a subject or help you take a photo of something right in front of you when you can't back up any further.
There's also a cool new portrait effect called high-key mono that lets you take a modern black-and-white photo with a white background. Night mode helps you to take better images through adaptive bracketing.
Video can also be taken in wide angle view and a wheel lets you slide back into a zoom mode. It can support 4K video up to 60 frames per second across both cameras and includes a cinematic mode. "Quick take" lets you tap and hold the shutter button to take a clip without switching out of photo mode.
On the front camera, you can take 4K video at 60 frames per second, slow motion effects have been added (feel free to goof off or take that slow-mo glamor video) and the camera will now track your face when the phone is turned horizontally.
The phone includes a new A13 Bionic chip. CPU performance is increased and the company claims it's the fastest in the industry, as well as the GPU. That will vastly improve the gaming experience, which is important given the launch of Apple Arcade.
Battery life is better than ever with an hour more time than the iPhone XR, Face ID has been improved and the phones will also be water resistant.
iPhone 11 Pro costs $999 and the iPhone Pro Max is $1,099. You can begin pre-ordering on Friday and the phones will start shipping by September 20.