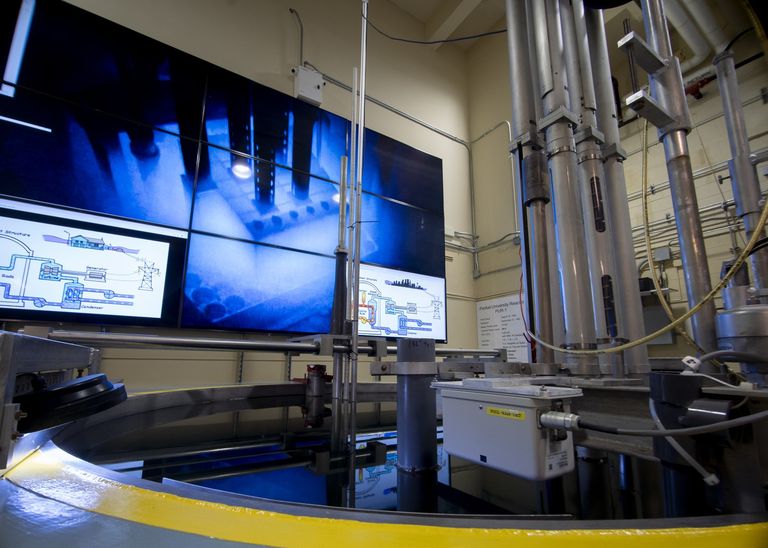 While nuclear reactors may still feel futuristic, they're far from the cutting edge. Until recently, every nuclear plant in America ran on decades-old analog technology. Now, scientists and engineers have transitioned Purdue University Reactor Number One (PUR-1) to all-digital, in hopes that they'll be able to push nuclear technology forward.
“As the United States and the world continue to implement digital technology, that introduces both strengths and vulnerabilities that need to be explored and understood because our economy relies on the resiliency of these systems,” says Clive Townsend, the supervisor for PUR-1, in a press conference.
As anyone who studied or experienced the Digital Revolution from the 1950s through the '80s can attest, digital systems generally offer a number of advantages over analog systems, like hand-soldered wires and vacuum tubes. There's a greater flexibility with digital systems, the ability to handle complex algorithms can allow for tremendous growth, and the systems can analyze themselves for maintenance.
For the nuclear industry, digital systems could open new possibilities in artificial intelligence, which is impossible with analog systems. And if parts need to be replaced, it's far cheaper to find digital products than boutique analog ones, however gorgeous they might look.
But while there are tremendous upsides to digital systems, that doesn't mean they're perfect. There's the potential for crashes, both with hardware and software. That's why PUR-1, licensed by the U.S. Nuclear Regulatory Commission (NRC), will serve as the country's first cyber-nuclear testbed.
PUR-1 is an academic plant that in the past has either been used for research purposes or to power other projects at Purdue. It's a whopping 1 foot wide by 1 foot long by 2 feet tall, located at the bottom of a pool that's 8 feet in diameter. Legally, it's only allowed to produce enough energy to power a hair dryer or a toaster.
PUR-1 became the second nuclear power plant built in Indiana in 1961, and the first ever to achieve criticality. It's currently the only nuclear plant in the state. After PUR-1's instrumentation and control equipment was replaced in 2012, it has alternated between being the object of research itself or powering other academic pursuits at Purdue.
With the digital plant running, it will be able to pursue both at the same time. Purdue wants the project open to as many corporate and academic partners as possible.
“We are inviting and forming partnerships—that could be private, other universities, or national labs—to explore how we can leverage the strengths of digital systems in order to ensure reliability,” Townsend says.
“We’re seeing renewed interest by members of the public and future students, as well as collaborations in private and public sectors, to use this small reactor for a variety of purposes, including detector characterization and new outreach capabilities across both the U.S. and the world,” he continues. “It’s really breathed new life, as well as new research capabilities.”
The conversion has been years in the making, with the process beginning in 2016. Part of what has taken so long is construction. For the first time, several parts used in the new PUR-1 are certified under the German Nuclear Safety Standards Commission (KTA), instead of just U.S. NRC standards. The move may be a small one, but to the recently tenuous nuclear industry, it could be a sign that the NRC hopes this project can go international.
“The fact that the NRC is accepting a digital console for a small research reactor, with parts certified under the KTA standards, signals the regulatory body moving toward approval in a large industry reactor,” Townsend says.
An international approach for the project is crucial for two reasons: The first is that most nuclear growth in the world is outside the U.S. The second is that international research is one of digitization's main benefits. The technology within the reactor will allow it to stream live data to remote locations. As a learning tool, it could be essential; researchers could track experiments in real time, and students could see the working parts of a reactor in real time.
“We can send signals to areas, such as schools in developing countries, that do not have the luxury of their own nuclear reactor facility and the associated educational infrastructure." said Seungjin Kim, head of the Purdue's School of Nuclear Engineering, in a July announcement. "As long as they have internet and this partnership with Purdue, they can see and study how the reactor works."
PUR-1's completion comes amidst a hunt for the next generation of nuclear tech. There are traveling wave reactors, which would hypothetically consume today's nuclear waste and has garnered the interest of investors like Bill Gates. Then there are thorium reactors, which would would use less uranium and produce far less waste in the first place and has been promoted by Democratic presidential candidate Andrew Yang. Neither technology has been put into civilian practice yet.
For now, the digital nuclear plant is here. While it likely won't revolutionize the industry as the other two technologies could, digitization might make plants run more efficiently and drive a low risk of accident even lower.