Smartphone Bumpers Automatically Protect Your Phone When You Drop It 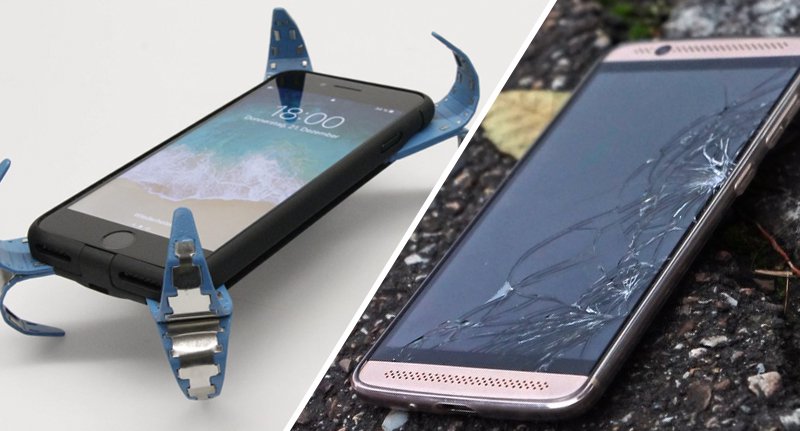 Picture the scene: you’re walking down the street without a care in the world, phone in hand, when all of a sudden a loud noise makes you jump.
As though happening in slow motion, you see your phone launch out of your hand, sail through the air and head unmistakably towards the concrete pavement.
Desperately scrambling to save your phone, you do the only thing you think possible – you throw yourself onto the ground, arms held high in the air, in the hope you’ll be able to catch it on its fall to Earth.
Obviously, you don’t catch it because you’re not athletic in any way and ultimately miss the falling phone by a window of five seconds. So you can only watch hopelessly as your beloved phone screen smashes into smithereens right next to you.
Okay, now that I’ve got your undivided attention, what if a device existed which meant your phone would automatically be protected in such situations of pure peril?
What if, instead of your phone having to rely on you to save it – because let’s face it, when has that ever been a good idea – something else could?
Look no further because such a device exists in the form of a smartphone case, which automatically deploys airbag-like bumpers if you drop it on the ground.
As reported by VICE, the case was designed by Philip Frenzel, an engineering student at Aalen University in Germany, after four years of hard work.
Frenzel told public broadcaster Südwestrundfunk he thought of the design after cracking the screen on more than one of his own phones. Don’t worry, we’ve all been there Philip.
The design is called ADCASE and has already won Frenzel the top award from the German Society for Mechatronics, which considered projects from students all over the country.
How does it work then? Flexible arms are hidden inside the phone case in each corner, and only deploy when tiny sensors inside detect the phone is in free fall.
The team plan to make the case compatible with the newest iPhones, starting with the iPhone 6, and are preparing a Kickstarter campaign they expect to begin in July.
Incredible. Why has no-one thought of this before?