Human Sight Could Be Restored for Blind People, Thanks to These 4 New Technologies 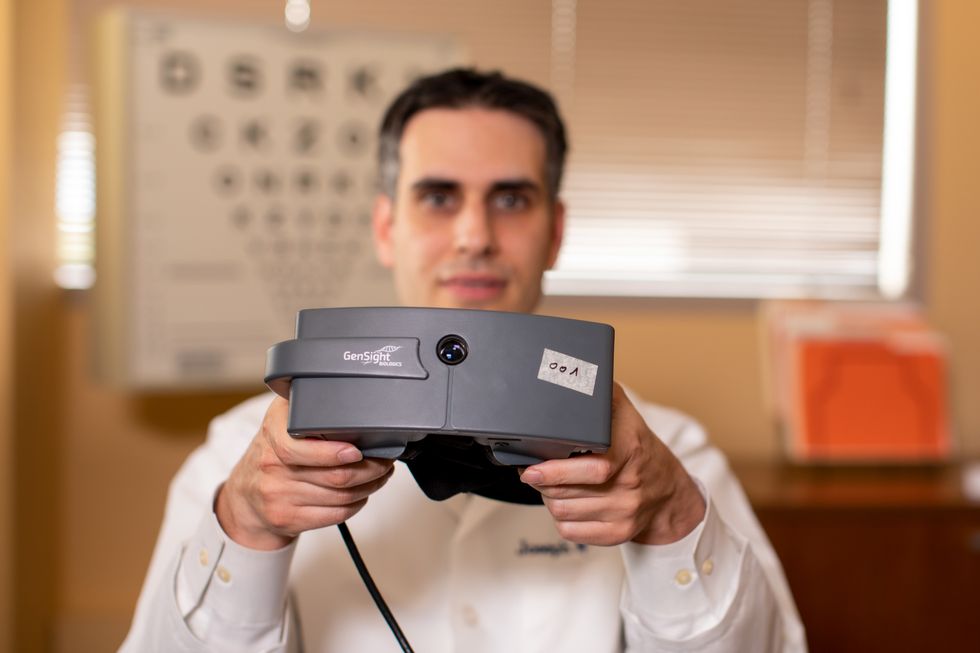 From a photovoltaic retinal prosthesis to visual stimulation through ultrasound waves, these futuristic techniques offer hope for blindness.

Diseases of the retina and age-related degeneration can lead to impaired vision.
Scientists working on restoring sight are developing multiple promising solutions.
These techniques bypass damaged retinas with a variety of alternate approaches that convince the brain to see..
The human retina—the light-sensitive part of the brain situated in the back of the eye—is a feat of engineering at the heart of a critical sense: Sight. So diseases of the retina like retina pigmentosa or age-related macular degeneration, which lead to impaired vision and blindness, can be particularly intractable and devastating.
But scientists are zeroing in on a suite of strategies that may offer a ray of hope.
? New technologies are amazing. Let’s nerd out over them together.
Exquisitely organized, the retina detects light from the environment around us and transforms it into electrochemical signals that ultimately reach the brain’s visual cortex, where they’re further processed and interpreted into images we can understand. But damage to any part of the system—from the light-sensitive photoreceptors to the bipolar cells they communicate with to the ganglion cells that transmit this information via the optic nerve to the brain—can eat away at our vision.
While there are myriad strategies to restore sight, retinal prosthetics, or electrode arrays implanted on or in the retina, have made the most headway. Bypassing damaged photoreceptors, the electrodes directly stimulate surviving neurons—either bipolar or ganglion cells—that feed into the brain’s visual cortex, imparting an artificial version of sight to patients. Most setups include a camera mounted on glasses that takes in images, which are translated into electrical signals by a processor. These signals are then sent to the electrode arrays.
Current technologies, however, can’t replicate the activities of the retina, which is a complex microprocessor with multiple synaptic stages, condensing information from 120 million photoreceptors to 1.2 million ganglion cells, says Diego Ghezzi, a professor of neuroengineering at the Ecole Polytechnique Fédérale de Lausanne in Switzerland. And the retina’s exact output to the brain—the spatiotemporal patterns of electrical pulses generated by the ganglion cells—is unknown. “So, since we do not have technology that can individually reproduce perfectly this code in 1.2 million retinal ganglion cells, what we do is an approximation,” Ghezzi tells Popular Mechanics.
A Prosthesis for the Eye
Ghezzi’s team has devised a photovoltaic retinal prosthesis, which functions similarly to the Argus II, the now discontinued prosthesis that had been in use since 2011. “The big difference is that our electrodes, like solar panels, are capable of absorbing light and converting it into electricity within the device,” Ghezzi says. And while glasses, amplifying ambient light to an intensity that the prosthesis can detect, are still necessary, Ghezzi’s system comes with several improvements over previous technologies.
“Visual acuity is limited by the distance between electrodes,” says Ghezzi. “In our device, that distance is 120 microns [compared to 575 microns in the Argus II], which corresponds to a visual acuity of 20/480.” Additional tricks, however, can boost this number. “You can zoom in with the glasses—so if you have to look at very tiny things like a textbook page, zooming can increase your resolution from 20/400 to 20/200, for example.” But this trick is performed at the cost of cutting into the visual field, or the area that’s visible when you fix your gaze.
Article & Photos Source
BY CONNIE CHANG
Popular Mechanics