Internet Explorer Is Officially Shutting Down Today After Nearly 30 Years 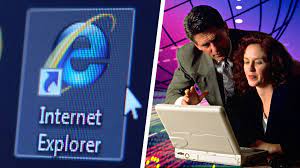 Microsoft and has sent Internet Explorer off to digital retirement after nearly 30 years of service.

The once-loved web browser began its life in the mid-'90s as part of an add-on package for Windows 95 that year.
For a fleeting period, it was all the rage.
That was until web users discovered less clunky, faster browsers that wouldn't drive them slowly bonkers.
According to Times Now, the browser reached its peak in 2003, with around 95 per cent of people online using it to access the internet.
But other browsers soon began cropping up and Internet Explorer's user base began to dwindle.
Even Microsoft ended up dumping it, with the tech company replacing it in 2015 with the Edge browser as its preferred program.
The last time the ole faithful browser had an update was back in 2013 when Microsoft introduced Internet Explorer 11.
If you're still using it, we highly suggest you leave the Dark Ages and come join us in the future.
Especially considering Explorer will be officially laid to rest today (June 15).
Microsoft will totally disable the desktop application, and if it is still working after zero software updates in nearly a decade, it certainly won't now.
Microsoft Edge program manager Sean Lyndersay said that 'the future of Internet Explorer on Windows 10 is in Microsoft Edge'.
"Not only is Microsoft Edge a faster, more secure and more modern browsing experience than Internet Explorer, but it is also able to address a key concern: compatibility for older, legacy websites and applications," he said, as per Times Now.
Even though Internet Explorer was a clunky hot mess, some nostalgic tweets have surfaced paying tribute to the real OG.
One user tweeted: "Internet Explorer to be finally shut down by Microsoft after 27 years. Thank you for helping us download other web browsers."
A second added: "If you are still using this browser, you'll receive this news sometime in the next 500 years."
While a third chimed in with: "The end of an error."
So, as many people delved into the internet for the first time with the help of Internet Explorer, it seems only fair to say farewell to our very first browser .
We'll miss accidentally clicking on you, saying 'damn it', shutting you down right away, and then opening Google Chrome.
Article & Photos Source
UNILAD - TECH
RACHEL LANG
Tweet
back to top