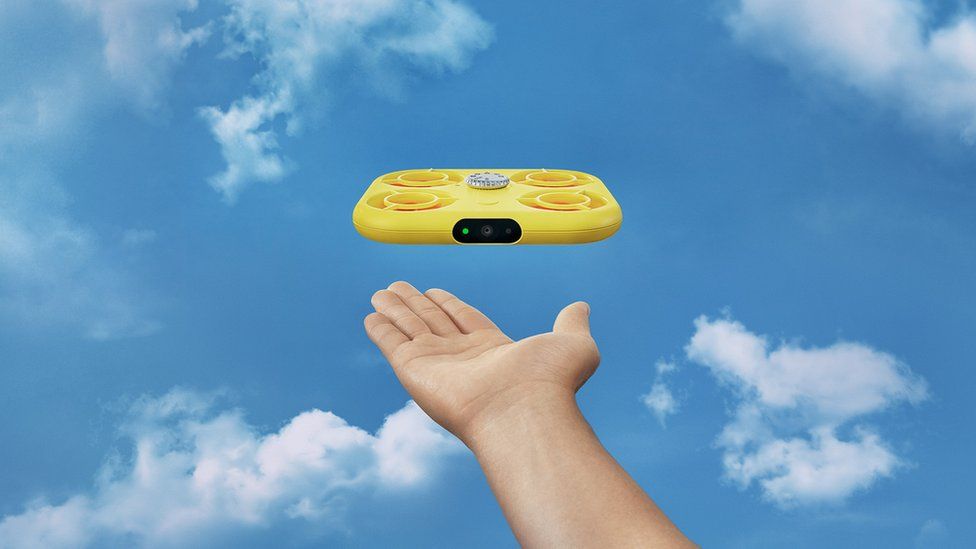 A flying camera is the latest release from Snap, the company best known for its photo-sharing app Snapchat.

The little yellow drone, called Pixy, is described by the company as a "free-flying sidekick" which can help people take selfies without a selfie stick.

The gadget is available in France and the US, where the laws are more lenient around the use of drones than the UK.

It comes as several social media giants are stepping up their hardware and Augmented Reality (AR) offering.

The Pixy operates on its own, taking video as it flies, which is then wirelessly transferred and saved in the app.

At the end of the flight, the selfie drone lands in the palm of your hand.

Although Snapchat does not receive the same level of attention as other social media networks such as Facebook or Twitter, it remains hugely popular.

Snapchat has 300 million daily active users around the world, according to the company. It also claims to reach more than 75% of those aged 13-34 in more than 20 countries.
The next craze
Snapchat is known for its AR "lenses" on phones, which overlay art on a selfie, or distort the live image in various ways.

The company has since launched an updated AR version of Spectacles but they are not yet on sale.

'The next smartphone boom'
Meanwhile there are high hopes for Pixy, as drones are increasingly embraced by industry and the general public.

"It can only be expected that personal drones will become commonplace in society.

"If it's small, light and slow, it's very unlikely to cause damage or injury. I can't see why they won't be the next smartphone boom."

r Jenkins expressed some concern about Pixy not having a direct controller but as the device is only 101g and has enclosed propellers it is unlikely to cause any damage even if it went rogue.

"It sits comfortably under the 250g limit where the user laws start to kick in," he said.

Snap says products such as Pixy are "subject to local, state and federal laws about who can fly them, how and where they should be flown" - and urge users to pay attention to the applicable drone laws.

Will Harford, director of photography at CloudVisual, suggests Snapchat should integrate multiple choice questions which have to be answered by the user before Pixy can be flown for the first time - so users are clear about local drone laws.

"Sadly this little drone is just too small to carry the hardware to know where it shouldn't fly, so it's down to the user to know and abide by the rules," he told the BBC.

Despite lightweight drones not being subjected to the stricter rules of their heavier counterparts, Mr Harford warns "common sense" must still be applied when using it.

"It would be a really bad idea to use it at an airport, where it is illegal for a drone to fly, irrespective of its weight."

A UK Civil Aviation Authority spokesperson said, "Anyone flying a drone in the UK needs to follow the UK Dronecode.Drones with a follow-me mode are allowed if the drone remains within 50m of you.

"Most drone users need to register with us as a drone operator and flyer but if a drone is classed as a toy then these are exempt, but users do still need to follow the Dronecode."

he launch of Pixy comes as Meta opens its first hardware shop to show off devices from Facebook and other big tech companies.

The Meta store will open in Burlingame, California on the 9 May - displaying products such as Ray-Ban AR glasses, the Portal smart camera, Quest and Beat Saber.

"We're not selling the metaverse in our store, but hopefully people will come in and walk out knowing a little bit more about how our products will help connect them to it," said Martin Gilliard, head of the Meta Store, in a statement on the company's website.

The move is seen as a further commitment to the company's investment in Virtual Reality and the metaverse.