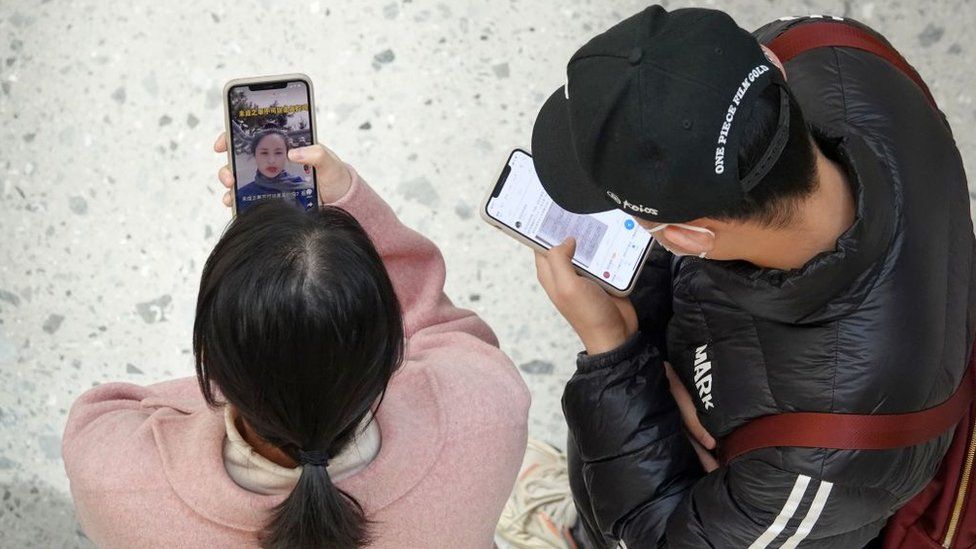 iPhone users at a shopping mall in China

A major producer of Apple's iPhone has become the latest manufacturer to halt operations because of the lockdown in Shanghai.
Technology company Pegatron says it has temporarily suspended production at two of its factories in China.
The announcement came even as authorities eased some of Shanghai's coronavirus regulations on Tuesday.
It means that some of the city's 25 million people are able to leave their homes for the first time in weeks.
The city was locked down in late March after infections surged in the key manufacturing and financial hub.
In a stock exchange filing Pegatron said it had halted operations at its factories in Shanghai and nearby Kunshan "in response to Covid-19 prevention requirements from local government".
The company said it would work with authorities "to resume the operations as soon as possible".
Major Apple MacBook manufacturer Quanta, and iPad maker Compal Electronics, have also paused activities in Chinese cities, according to Japanese newspaper Nikkei.
Pegatron did not give any further details when contacted for comment by the BBC. Apple, Quanta and Compal did not immediately respond to requests for comment.
Shanghai's U-turn on its Covid approach
Shanghai lockdown residents 'running out of food'
Dan Ives, an analyst at investment firm Wedbush Securities, said he expected the shutdowns to have an impact on production.
He estimated that the production of 3 million iPhones has been affected so far this month, "with more to come if this continues".
Mr Ives also told the BBC that production of 2 million iPads and 1 million MacBooks may also be affected.
"The Pegatron closures throw gasoline on the raging fire which is the supply chain for Apple and other parts of the iPhone ecosystem," he said. "This amplifies supply chain issues for iPhones."
Another Taiwanese company Foxconn, which also assembles iPhones for Apple, halted operations at its factory in Shenzhen last month.
It shifted production to other manufacturing sites, while resuming operations in Shenzhen with employees working in a closed loop system, which saw staff living and working at the plant.
Since the pandemic began in 2019, China has enforced shutdowns affecting millions of people in major cities including Xi'an and Wuhan.
The lockdown of Shanghai is the largest to date and the city is a key centre for the financial industry, manufacturing and home to the world's biggest port.
Article & Photos Source
NEWS BBC
The BBC's Stephen McDonell visited Wuhan ahead of the anniversary of the world's first Covid-19 lockdown