Virgin Hyperloop to focus on cargo, not people 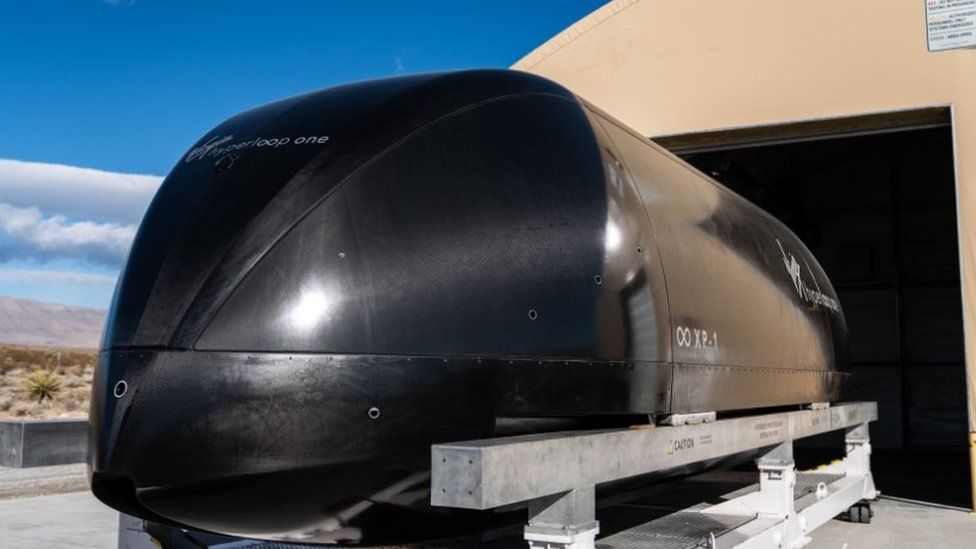 Virgin Hyperloop, a futuristic train service that promised a new era of travel for passengers, will be focusing on cargo instead, it has revealed.
The company told BBC News the change in direction was due to global supply-chain issues and Covid.
The Financial Times, which first reported the story, said it had also laid off more than 100 staff members.
Experts have expressed doubts about the engineering challenges and practicalities of Hyperloop travel.
The company said: "The global supply chain has experienced dramatic changes in the past year, due in part to the worldwide pandemic.
"Virgin Hyperloop as a company is responding to strong customer demand for a cargo-based hyperloop system and is focusing its resources on delivering this product."
Its long-term vision remained to "address passenger mobility", the company added.
Magnetic tracks
DP World, a logistics provider owned by the Dubai government and a majority stakeholder in Virgin Hyperloop, told the Financial Times that "focusing on pallets is easier to do - there is less risk for passengers and less of a regulatory process".
The idea of a Hyperloop was first conceived by tech entrepreneur Elon Musk, who suggested the idea of a high-speed transport system in a vacuum tube in a 2013 research paper.
The pods would travel through the tubes at more than 600mph (1,000km/h) on magnetic tracks, similar to those used by existing Maglev trains.
There are several firms working to make the vision a reality, including Hyperloop Transportation Technologies and Virgin Hyperloop.
Initially founded as Hyperloop Technologies in 2014, the firm became Virgin Hyperloop when British billionaire Richard Branson invested $85m (£62m) in the business in 2017.
At the time it was hailed as "the world's most revolutionary train service".
In late 2020, the firm unveiled its vision for the future of Hyperloop travel - with a video taking people through a typical journey "from arriving at the portal to boarding the pod".
Sultan Bin Sulayem, the chairman of the firm, called it "the first new mass-scale transportation mode in a century."
Virgin is the only company to have completed a successful passenger ride using hyperloop technology so far. It took two passengers - both company staff - on a 500m test-track, reaching speeds of 107mph (172km/h) in November 2020.
But many felt the technology was more hype than Hyperloop.
At present, the transport system is unable to cope with corners, so the tracks have to run in a straight line.
Moreover, the costs of building such systems at scale would run into the billions.
Article & Photos Source
BBC
NEW
By Jane Wakefield
Technology reporter