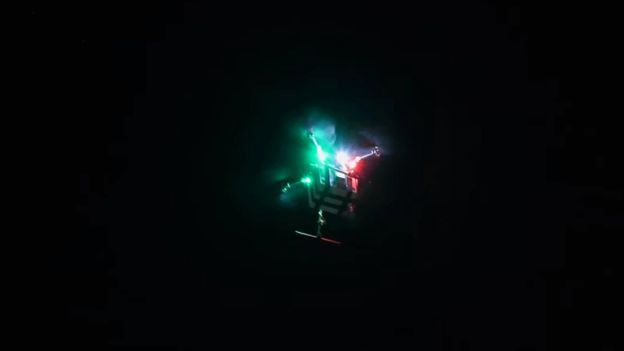 A donor kidney has been delivered to surgeons at a US hospital via drone, in the first flight of its kind.

Many see huge potential for unmanned aircraft systems (UAS) delivering medical products, with some drones already doing so in Africa.

The US flight required a specially-designed drone which was able to maintain and monitor the organ.

It is hoped that it can pave the way for longer flights and address safety issue with current transport methods.

The recipient, a 44-year-old from Baltimore, had waited eight years for the transplant.

She said of the unusual delivery method: "This whole thing is amazing. Years ago, this was not something that you would think about."

According to the United Network for Organ Sharing, which manages organ transplants in the US, in 2018 there were nearly 114,000 people on waiting lists, with 1.5% of organs not making it to the destination and nearly 4% being delayed by two hours or more.

"Delivering an organ from a donor to a patient is a sacred duty with many moving parts. It is critical that we find ways of doing this better," said Joseph Scalea, assistant professor of surgery at University of Maryland School of Medicine (UMSOM), and one of the surgeons who performed the transplant.

"As a result of the outstanding collaboration among surgeons, engineers, the Federal Aviation Administration (FAA), organ procurement specialists, pilots, nurses, and, ultimately, the patient, we were able to make a pioneering breakthrough in transplantation."

The three-mile journey required a lot of new technology, including a custom-made drone capable of carrying the additional weight of an organ, which also needed on-board cameras and organ tracking, and communications and safety systems for a flight over an urban, densely-populated area.

"There's a tremendous amount of pressure knowing there's a person waiting for that organ, but it's also a special privilege to be a part of this critical mission," said Matthew Scassero, part of the engineering team based at the University of Maryland.

Charlie Alexander, chief executive of The Living Legacy Foundation of Maryland, a charity working to increase organ donation, said: "If we can prove that this works, then we can look at much greater distances of unmanned organ transport.

"This would minimise the need for multiple pilots and flight time and address safety issues we have in our field."