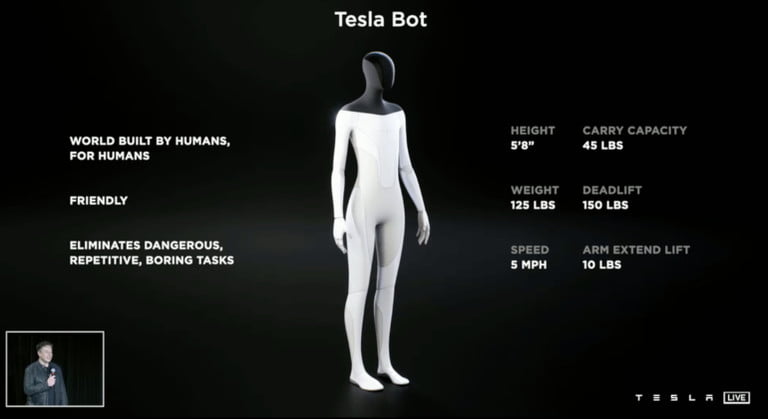 It seems that Elon Musk is not enough to go into space, implant brain chips or be the largest electric car manufacturer in the world. The mogul announced on August 19, during the close of Tesla's AI Day, his plans to make a humanoid robot based on Tesla technology and artificial intelligence.
The next Tesla Bot, as Musk called it, is designed to perform dangerous, repetitive, and boring tasks for humans. It is capable of running at a speed of 8 kilometers per hour and has a weight of 56 kilograms. The first prototype is expected to debut sometime next year.
The Tesla Bot will be capable of carrying 20 kg and lifting 70 kg from the ground. It will have 40 electromechanical actuators throughout its body that will allow it to make the necessary movements, as well as eight cameras that use the same autonomous technology of Tesla cars to detect and identify elements. You will also have an information screen on your head.
As for its appearance, it is really that of a humanoid: impersonal and, why not say it, a bit gloomy. The built-in artificial intelligence will allow you to learn and respond to the instructions given. For example, according to Musk we can ask him to go to a store and bring us a series of products.
The executive also suggested that the robot could perform tasks on Tesla's production lines. Musk believes that with robotic technology executing more and more physical jobs, providing people with a universal basic income will one day become a necessity, something that for the moment is quite a utopia.
Editor's Recommendations
Intel XeSS vs. Nvidia DLSS vs. AMD Super Resolution: Super Sampling Fight
We show you how to deactivate the Google Assistant
The scene of a train falling into the void is filtered in Mission Impossible 7
How to block annoying text messages on your phone
Tokyo 2020: how and where to watch the Paralympic Games
Article & Photos Source For Érika García 20 de agosto de 2021